15 percent more passengers in the first half of 2016

With an increase of 15 percent in passengers of Memmingen airport results a very positive balance of the first half of 2016.

For the whole year 2016 Memmingen airport expects a total of 950,000 passengers. “The climb continues” says Airport Manager Ralf Schmid about the positive development of the first half with a total of 437,785 passengers. Last year there were 383,733, which represent an increase by 15 percent.

In addition to the top customers Ryanair and Wizz Air also ranked at the Allgäu Airport Pobeda, Austrian Airlines and Fly Niki on the next places. The most popular destination is still London, followed by Porto and Dublin. In fourth place comes Skopje, then already Moscow. The new Moscow connection was successfully launched on March 3rd by the Russian airline Pobeda.
There has also been increased aircraft utilization. They increased by another four percentage points from last 78 to now 82 percent. The day with the highest number of passengers was the 17th of May, when at the beginning of Pentecost 3,900 passengers were recorded. On April 21st there was the record of these movements: A total of 130 times launched or landed a plane at the Memmingen airport.

By the end of the year, the airport expects a total of 950,000 passengers who have chosen Memmingen airport as their airport. 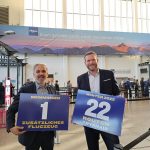