Rome is back! From September, Memmingen Airport will once again be connected to the Italian capital, thanks to a new route offered by Wizz Air.
From September 5, the Eternal City will once again be a little closer to the Allgäu Region. Fiumicino Airport will then be served non-stop by the airline Wizz Air twice a week – on Tuesday and Saturday – and tickets are already available. „We are very pleased that Rome will once again appear on our flight schedule,“ emphasizes Airport Sales Manager Marcel Schütz. Already in the early years of Memmingen Airport, the Italian capital was one of the most popular destinations. After all, the metropolis is a perennial tourist attraction. Wizz Air, which mainly serves destinations in Eastern Europe from Memmingen, has been expanding its activities in Italy for some time now, also connecting Memmingen with Catania in Sicily. In addition, Ryanair serves Palermo, Naples, Brindisi, Pisa and Lamezia Terme. With that, Memmingen Airport will have an attractive range of services to Italy in the coming summer. 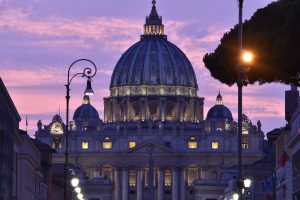 According to an ancient legend, the city of Rome was founded 753 BC.

END_OF_DOCUMENT_TOKEN_TO_BE_REPLACED

In the period from July 29 to September 12, were 326,738 passengers counted. This represents an 18 percent increase in comparison to summer of 2019 with 277,122 passengers, which was still unclouded by Corona. Compared to the 2021 summer vacation, this results to an increase of 43 percent. “We’ve never had a record summer like this,” emphasizes airport CEO Ralf Schmid. The reasons, he says, are varied. “Above all, there was an immense desire for vacation and travel,” he explains. This affected both the classic sun and vacation destinations as well as visits to friends and relatives, which are particularly important on routes to Eastern Europe. “Many people had not seen their loved ones for two years,” Schmid reports. However, the constantly growing range of attractive routes also contributes to the rate of increase. His conclusion: “We are one of the few German airports that has left the pre-crisis level behind and is on a clear growth path.” In total, more than 1.3 million people have already flown to and from Memmingen this year by the end of the summer vacations.

On peak days, up to 8,000 passengers were handled at Memmingen Airport. “This was an enormous challenge for our team, but they did a great job”, Schmid reports. “A big thank you for that!” On all flights, the capacity had reached a peak of almost 90 percent. Most of the passengers flew to Mallorca, followed by Sofia and Pristina. The routes to Porto, Calvi on Corsica and Alicante were the busiest and most in demand. The airline Ryanair also welcomed its eight millionth passenger from Memmingen during the summer vacation.