From 28 March: Ryanair launches new routes to Pisa and Pescara

Bella Italia is coming a little closer again. From the end of March, Italy lovers will have two more opportunities to reach the country of their dreams non-stop from Memmingen Airport. Because Ryanair is now adding Pisa and Pescara to its programme.

Despite all odds, many people want to realise their long-delayed holiday dreams this year. “We have been feeling a great demand for flights to the sun for weeks now,” explains airport sales manager Marcel Schütz. Italy is also high on the list of popular holiday destinations. “We are all the more pleased,” says Schütz, “that with Pisa and Pescara we can now offer two more tourist heavyweights.” From 28 March, there will be non-stop flights from Memmingen with Ryanair every Monday and every Friday to the city, which is not only world-famous for its leaning tower. With the Galileo Galilei International Airport two kilometres south of the city centre, it also has the most important airport in central Italy and functions as an ideal starting point for trips through Tuscany, to Florence or to the nearby Ligurian Sea. On the other side of the boot, the port city of Pescara shines with its kilometre-long Adriatic beaches and the Abruzzi in the hinterland, which can be easily explored from here. The Ryanair flight will take off for the first time on 29 March from Memmingen to Pescara and will then operate every Tuesday and every Saturday.

From 27 March again to Sardinia

Sardinia is also a perennial favourite. That’s why Ryanair is reintroducing the connection from Memmingen to Alghero as of 27 March. Twice a week – on Wednesday and Sunday – there will be non-stop flights to the city on the west coast. Sardinia, the second largest island in the Mediterranean after Sicily, is expecting many guests to return this summer.
As already reported, Ryanair will be connecting Memmingen Airport with another place of longing from 27 March: Santiago de Compostela, the destination of St James’ pilgrims, will be on the flight schedule for the first time. The capital of Galicia in northwest Spain will be served twice a week (Sunday and Thursday). 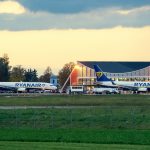