By In Allgemein, Press

Memmingen Airport reports a new passenger record. Never before in the nearly twelve-year history of the airport were so many passengers processed in one day as on the past Easter Saturday.

Already the days before, the daily passenger numbers were over 7,000. However, the Easter Saturday broke all records: 7,900 passengers took off or landed at Memmingen Airport. In total, 21 flights were handled on this date with one takeoff and one landing each. “A big compliment to our team,” says Airport Managing Director Ralf Schmid. “That was a real effort, everyone did their best. Here we reach our capacity limit,” emphasizes Schmid. The planned expansion of the luggage hall will soon provide a remedy. It is also recommended to book parking space at the airport during the holiday season in advance online.

END_OF_DOCUMENT_TOKEN_TO_BE_REPLACED

By In Allgemein, Press

The current route network from Memmingen extends far beyond Europe. The “classics” such as London, Dublin and Palma de Mallorca are joined by destinations in North Africa and Asia. “Our mix is becoming more varied and colorful,” emphasizes Airport CEO Ralf Schmid. “Everyone can choose their desired destination.”

New destinations are Bucharest and Suceava in Romania, Ohrid in Northern Macedonia and Tirana the capital of Albania, while Chania in Crete makes a comeback.

New special charter destinations are Lamezia Terme in Italy and the Channel Island Jersey. Both are offered by the tour operator Globalis Erlebnisreisen.

The incoming share, guests flying to Memmingen from abroad to visit relatives, for vacation, or study and work, is also increasing. This applies in particular to the 24 routes to Eastern Europe. Due to high demand the frequencies have been increased on several existing routes.

From September 17th to September 30th the airport will remain closed due to extensive constructions. Ryanair has canceled all connections to and from Memmingen during this time, Wizz Air and some charter flights will shift their flights to other airports.

The entire flight plan with all destinations and times can be found here.

From Memmingen airport to Tirana and Ohrid

The route network in Eastern Europe from Memmingen Airport grows. Starting this summer the airline Wizz Air offers Ohrid in Macedonia and from September the Albanian capital Tirana.

“Both new routes again offer a mix of tourist and economic travel motifs,” explains airport sales manager Marcel Schütz. “And as on all our routes to Eastern Europe, these too are heavily used for visits to friends and relatives in both directions.”

Tickets can already be booked.

Memmingen Airport continues its success story and announces a new passenger record for the past year: 1,492,553 passengers decided in favor of Bavaria’s third commercial airport in 2018, an increase of 26.5 percent. In 2019 the responsible expect double-digit growth.

A total of seven airlines flew Memmingen in scheduled and charter operations, serving 50 destinations in Europe, Africa and Asia. “With this success, we are reaping the fruits of successful and hard work,” emphasizes Airport Managing Director Ralf Schmid. “Memmingen Airport is a continuation success story,” he explains at the presentation of the latest figures. According to Schmid, the airlines, who continued to expand their offer in Memmingen last year, also made a major contribution to the success. Almost every new destination is immediately enjoying great popularity.

A renewed confirmation of the Memminger successful course delivered recently the airline Ryanair. After declaring the airport a base in 2017 and stationing an aircraft on-site, Ryanair will base a second aircraft in Memmingen at the end of March. It will help to expand existing routes and establish new ones.

Memmingen Airport expects 1.65 million passengers for the current year. This is equivalent to further growth of around ten percent compared to 2018. The plus would have been about 65,000 passengers larger, it the widening of the runway in September would not require a two-week closure of the airport.

More and more winter sports fans are discovering the airport.

“Anyone who arrives with us, has on many days the nearby mountains already in view,” explains airport managing director Ralf Schmid. The winter sports centers in the Allgäu, in Tyrol and Vorarlberg as well as in Switzerland are only a stone’s throw away from Memmingen, so many skiers can take advantage of the inexpensive nonstop flights to Memmingen to land quickly in the snow. For years, the flights from Kiev and Moscow as well as the machines from London and Dublin have been heavily frequented by ski vacationers during the winter months. Thanks to the Stockholm-Memmingen connection, more and more Swedish skiers, who are not spoiled at home with a large number of large ski areas, reach alpine regions. The new connection to Tel Aviv not only brings tourists to the Holy Land, but also enthusiasts of winter sports enthusiasts and Europeans living there to the ski slopes of Oberstdorf, Ischgl and St. Anton. The equally new Memmingen-Edinburgh route gives ski-friendly Scots new momentum.

In order to keep the transfer times in the preferred winter sports centers as short as possible, the Allgäu Airport Express offers a new service this winter: From 22 December to 29 March, a ski shuttle operates between Memmingen Airport and Tyrol every Saturday. Matched to the arrival times of the machines from Kiev, Moscow and London, he brings the ski tourists to Sölden in the Ötztal, to Ischgl and St. Anton and later back to the airport again. Each customer is driven to his hotel and picked up there again.

From April back to Crete

One of the most popular routes of recent years returns to the Memminger flight plan: From April 3 next year, it goes twice a week to Chania in Crete.

“Chania was always in high demand among our passengers,” reports airport sales manager Marcel Schütz. “That’s why we’re delighted that we can offer this target again.” In May of this year, the connection had been discontinued due to lack of aircraft availability. By stationing a second Ryanair aircraft in Memmingen, the route can now be resumed punctually at the start of next spring. From 3 April 2019 you can fly nonstop on every Wednesday and every Sunday from Memmingen to the port city on the northwest coast of the Greek island. Known for its 14th-century Venetian harbor, for its narrow streets and waterfront restaurants, Chania is also an ideal base from which to explore the island. Flights are already bookable.

The Irish airline Ryanair will station a second aircraft in Memmingen at the beginning of the summer timetable 2019.

Airport manager Ralf Schmid, who recently welcomed the ten-millionth passenger in the now more than eleven-year history of Bavaria’s third commercial airport, was happy about “an early Christmas present”. “This is also a confirmation of our trusting cooperation,” he explained. “Ryanair can count on us – and we can rely on Ryanair.”

With Memmingen, the airline opened its tenth base in Germany in September last year and established six new routes in the winter of 18/19, which provided a further growth spurt at the airport. Now the second machine should also help to expand existing routes. So you can fly six times a week to Palma de Mallorca next summer. On top of that, it ensures more pleasant flight times, as many destinations are now served first from Memmingen and passengers can enjoy more time on the spot. It is also clear that the number of locally based Ryanair employees will almost double from 35 so far.

Ryanair offers Marrakech, Lviv, Brindisi, Banja Luka and Edinburgh, Wizz Air flies from Memmingen for the first time to Pristina in Kosovo and Chişinău, the capital of Moldova. In addition, the connection Memmingen-Moscow is again five times a week on the flight plan of the Russian airline Pobeda. 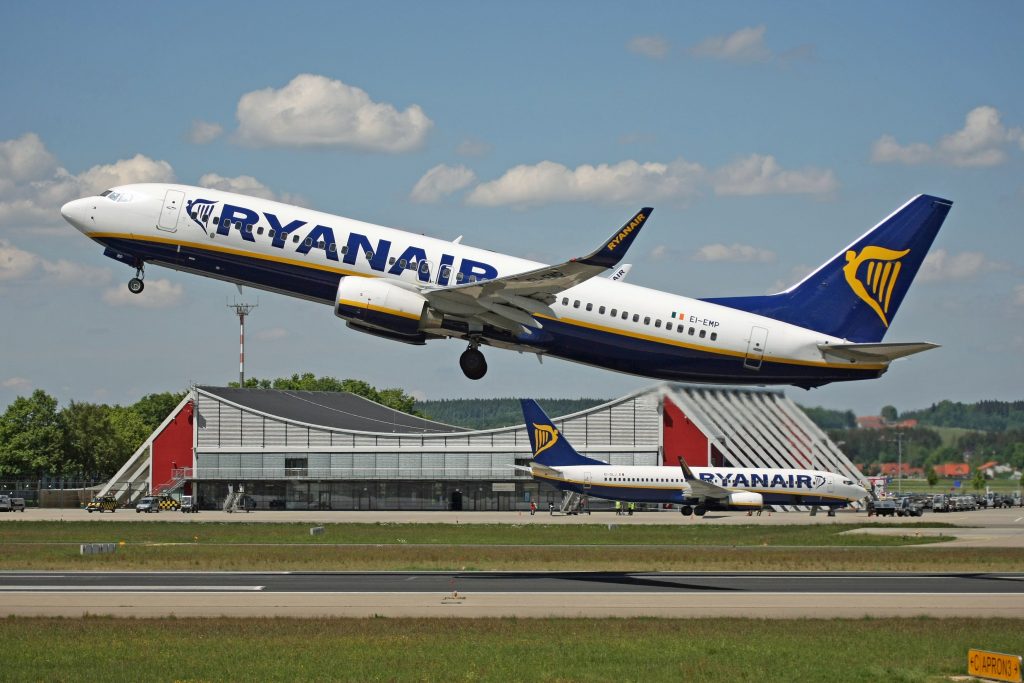 New record since the beginning of civil aviation

Airport managing director Ralf Schmid gave the bewildered couple from Rieden in the Allgäu a flight voucher from Ryanair and a gift basket. The reason: Petra Hörauf (63) is the ten millionth passenger of the Memminger Airport since its restart as a civilian airport in 2007. The couple moved from North Rhine-Westphalia to the Allgäu only three months ago and used for the first time the airport Memmingen for a city trip to London.

“Ten million passengers are ten million arguments for Bavaria’s third commercial airport,” emphasized Ralf Schmid on site.
“We are very pleased that we have a significant share of this proud number,” said Lisa Maria Rumpf, who is responsible for Ryanair sales and marketing in Germany, Austria and Switzerland. With around 5.9 million passengers, Ryanair, present in Memmingen since 2009, leads the list.

Among the most popular destinations to and from Memmingen in the past eleven years, London is in the lead, followed by Dublin and Palma de Mallorca. On the other places can be found from the days when inner-German destinations were still possible, Berlin and Kiev, Porto and Alicante.

With great demand is also expected again on the upcoming Christmas holidays. Ryanair and Wizz Air have arranged additional flights to Palermo, Porto, Alicante, Malaga and Tenerife, as well as to Tuzla, Varna, Sibiu, Belgrade and Kiev, which are already fully booked. 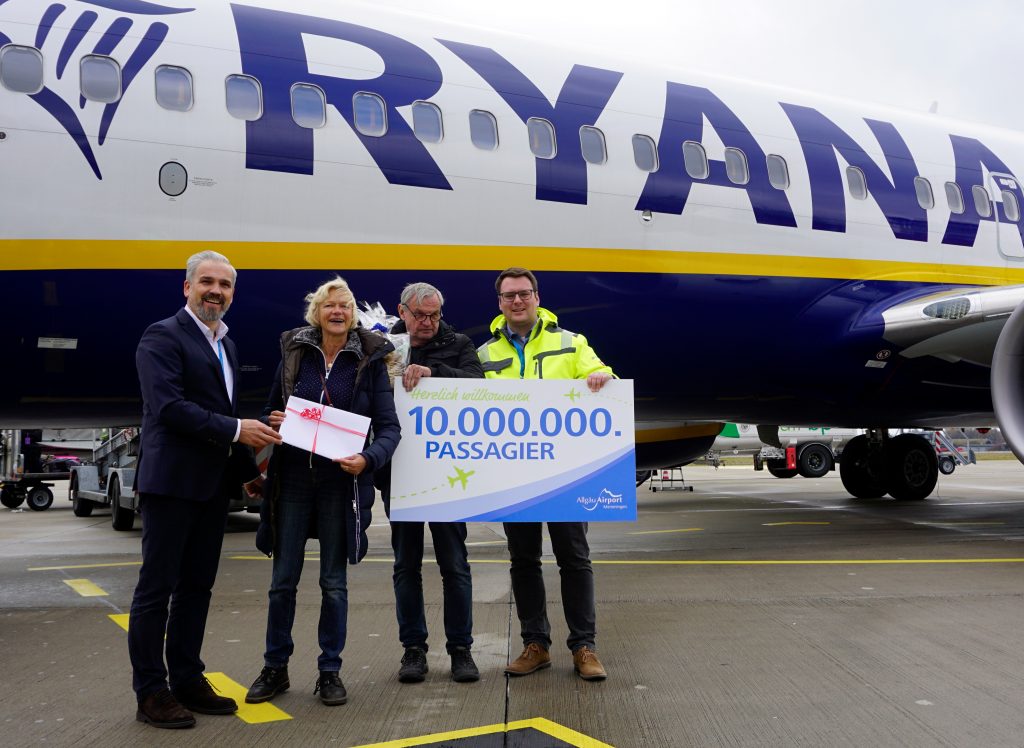 Three times a week to the “Paris of the East”

From April 2, 2019 from Memmingen to Bucharest, the capital of Romania. Wizz Air will connect Memmingen with Bucharest three times a week – on Tuesday, Thursday and Saturday.

The metropolis, which has a population about two million, is the political, economic and cultural center of the country. Due to its Neo-Baroque architecture, which comes from the French influence, the city was once called “Paris of the East”. During the tenure of Romanian dictator Nicolae Ceauşescu, however, several historic quarters had to yield to the head of state’s monumental sugar confectioner. Today, the cityscape is characterized by a diverse architecture with a colorful mix of styles.

“Our existing routes to Romania impressively demonstrate the good relations between the two countries and the diverse connections between their people,” explains airport sales manager Marcel Schütz. After Sibiu, Cluj-Napoca, Timisoara and Tirgu Mures, Bucharest is now the fifth Romanian destination from Memmingen. The Bucharest Henri Coandă Airport in Otopeni is located around 20 kilometers north of the city and is connected to the center by two express bus lines.

Closed because of expansion

In order to realize the planned expansion of the runway in a timely manner, the entire flight operations will be suspended from 17 to 30 September 2019.

Intensive consultations and calculations now have the original plan to widen the runway from 30 to 45 meters and to carry out all work at night, waste during flight operations. Requirements imposed by the authorities, which required extensive cover during the day for earthworks for the safety of flight operations, led to this decision. Talks have already been held with the airlines concerned. Also business and charter flights can not be carried out during this time.

At present, the planning and preparatory measures for the expansion of the airport are in full swing. In addition to the renovation and broadening of the runway and the state system is renewed. In addition, the luggage hall will be expanded, apron areas increased and a rainwater retention basin built. The completion of all work is expected in 2020.