New bridge between Swabia and Bukovina

First flight to Suceava with “ambassadors” of the district

Suceava is the sixth destination of Memmingen Airport to Romania. The destination has a special relationship with Swabia. It was also settlers from Swabia, who have influenced the image of Bukovina in the 19th century.

The district of Swabia maintains a regional partnership in the Romanian-Ukrainian border region Bukovina since 1997. It was formed thanks to the historical ties of Swabia to the former “Buchenland”, where many people of German descent lived. The district Swabia is very pleased about the new, long-awaited direct flight connection. “This facilitates our partnership work and the creation of further contacts in the Bukovina,” says former district president Jürgen Reichert at a press conference before the first flight, which he boarded with other representatives of the district. Airport managing director Ralf Schmid has been trying to fulfill the desire of the region for a direct flight connection to this destination for some time. “I am very pleased,” says Schmid, “that together with our partner Wizz Air, we have now succeeded in putting this tradition-rich connection between Swabia and Bukovina on a new basis with tree flights per week.” “With the new flight connection we move even closer together,” says former district president Jürgen Reichert.

The current exchange between the regions is characterized by youth and educational work as well as exchange of expertise between social and medical institutions. In addition, there are many contacts through the Bukovina Institute, an affiliated institute of the University of Augsburg, which is dedicated to the study of the culture and history of Bukovina and Eastern and Southeastern Europe. The district of Swabia also looks after an information point in Suceava, which provides information about Swabia and Bavaria.

Passengers on the first flight are the former district president Jürgen Reichert, Dr. med. Philipp Prestel, European Commissioner for the Swabian district and Katharina Haberkorn, partnership representative for Bukovina in the European Office of the district.

Three times a week – Monday, Wednesday and Friday – the airline Wizz Air offers flights from Memmingen to Suceava. Today, the northern half of the Bukovina region belongs to the Ukraine, the southern part to Romania.

After Sibiu, Cluj-Napoca, Timisoara, Tirgu Mures and the capital Bucharest, Suceava is the sixth Romanian destination from Memmingen. Overall, the airport now offers 23 routes to and from Eastern Europe. 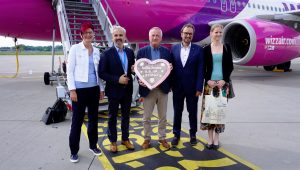