Now with Wizz Air to Georgia

On Friday 23rd of September started Wizz Air its inaugural flight from the Allgäu Airport Memmingen to Kutaisi, its easternmost destination. It takes four hours to reach the second largest city of Georgia.

The crew of the inaugural flight from Memmingen to Kutaisi received from Allgäu Airport Sales Director Marcel Schütz a gingerbread heart, which has already become a tradition.

Wizz Air flies twice a week – Friday and Monday – to the city in western Georgia with about 200.000 residents. As the second largest city of the country and capital of the region Imereti, Kutaisi is considered as the economic, touristic and cultural center of the region.
“On this route, we expect a large proportion of individual tourists, who want to discover a new, upcoming region.” explains Allgäu Airport Sales Director Marcel Schütz.
Germany is one of the most important trading partners of Georgia between Caucasus and the Black Sea Coast. The airport of Kutaisi is around 90 minutes from the Black Sea and 2.5 hours from the Turkish-Georgia border located.
Flights can be booked from € 19.99 one way at www.wizzair.com . 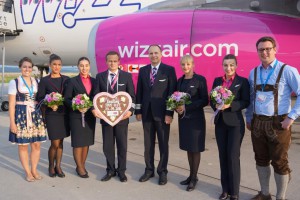