According to the calendar, spring has only just begun, but at Memmingen Airport, summer already starts next Sunday (27 March). The summer flight schedule, which comes into effect on that day, already urgently requires the purchase of a bikini, swimming trunks and suntan oil. After all, it offers sea, beach and sunshine, four new destinations, a new airline partner and more service for passengers on departure.

Memmingen Airport currently has a total of 54 destinations to offer this summer. The wide-ranging route network extends from Alghero on Sardinia to Zadar on the Croatian Adriatic coast. For friends of the southern way of life, Ryanair presents new delicacies: Pisa and Pescara in Italy and Santiago de Compostela in Spain. As before, many routes lead to well-known holiday destinations around the Mediterranean and beyond. Greece is represented with Thessaloniki and the islands of Rhodes and Crete. While Ryanair flies to Chania on Crete, the airline Corendon offers Heraklion as a destination there. Corendon is also represented this summer with Antalya in Turkey and Hurghada in Egypt. Sicily is also on offer twice. Ryanair flies to Palermo, Wizz Air to Catania. Wizz Air traditionally covers Eastern Europe with numerous routes this summer. Kukes in northern Albania is a new addition.
Among the airline partners that rely on Memmingen Airport, Eurowings is represented for the first time this summer. The airline, which belongs to the Lufthansa Group, will be connecting Memmingen with Mallorca three times a week from May. This means that the airport will have a total of 13 Mallorca flights a week this summer, as Ryanair also flies to the Balearic island, in some cases several times a day. The weekly flight from Memmingen to Calvi on Corsica, which the tour operator Rhomberg will be offering its guests from 29 May, also promises a stone’s throw away from the sun. Globalis, a specialist for guided adventure tours, is back in Memmingen and organising three trips to the Channel Islands of Jersey and Guernsey in cooperation with the airline Blue Islands.

New service: Self Bag Drop
“After two pandemic years, despite all the current crises, there is a strong need for holidays and relaxation,” reports Airport Managing Director Ralf Schmid. “The airlines have already reacted to this and expanded their offerings.” This summer, Ryanair is significantly increasing the number of flights to Zadar, Brindisi and Girona near Barcelona in Spain. In order to be able to start the holidays carefree, the airport managers have introduced a new service: For all Wizzair and soon also Ryanair passengers who have already checked in online and have a boarding pass, there is now the option of “Self Bag Drop” in the terminal. Here you can simply drop off your luggage and do not have to queue at the check-in counter. This saves time – but in general, passengers should not plan too tightly, especially during the holiday season. “Our check-in counters open at least two hours before departure,” explains Ralf Schmid. For those arriving by car, he has another tip ready: “Book the parking space of your choice online in advance.” Otherwise, it could happen in the high season that the parking space of your choice is already occupied. 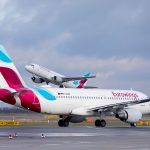 From May with Eurowings to Mallorca